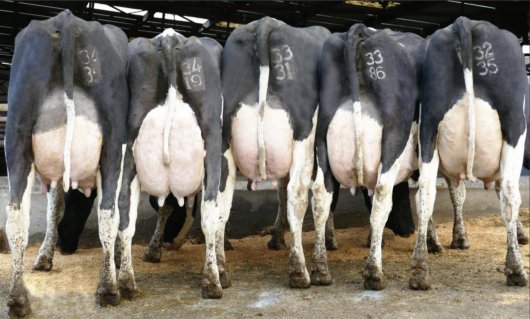 Autumn calved cows and heifers averaged €2,319 at the Rushwee dispersal sale for Rory and Mairead Crinion & family. There was strong demand for pedigree Holstein Friesian stock with a proven track record. The sale was conducted by Taaffe Auctions and was held at Carnaross Mart, Kells, Co. Meath, on Wednesday December 4th. 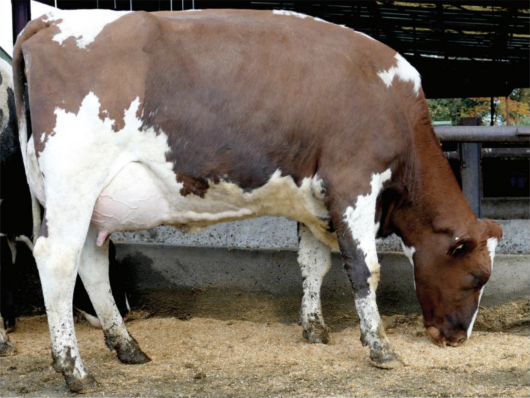 Next top price was 3rd calver Rushwee Lar Macushla 93 selling for €3,360 (lot 28). Her heifer calf sired by Milewater Leon sold for €820, achieving a combined value of €4,180 for mother and daughter. Calved since early September she is currently recording 42 litres/day. Her sire is the stock bull Evergrange Lar, a Braedale Goldwyn son. She is projected to yield over 9,900kgs milk and 678kgs milk solids this lactation. She is backed by a VG88 dam and VG87 grand dam with the Macushla family tracing back to Moneymore and Kellsingram breeding.
In total 132 lots were sold on the day with a summary of other top prices including;
Lot 42 Rushwee Atlantic Annette 26 sold for €3,171. Calved since mid-October this 2nd calver is currently recording 48 litres/day. She is projected to surpass 10,000kgs milk with 4.66% fat, 3.50% protein, 826kgs milk solids this lactation.
Rushwee Kodak Oldbridge 5 (lot 57) sold for €3,150. Calved with her 3rd since mid-November she is a 4th generation 3.50% protein cow having recorded 8,242kgs milk, 4.36% fat and 3.57% protein in her last completed lactation.
Rushwee Legend Dawn (lot 60), 4th calver, sold for €3,098. Calved since mid-November she is currently recording 29 litres/day. She is a high components cow with fat to 5.00% and protein to 3.59% in previous lactations.
Lissispin Daisy 89 (lot 24) a potential 16th generation VG/EX sold for €3,060. She calved-in with her 2nd at the end of September, currently recording 31 litres/day with SCC of 16. She had been purchased as a heifer calf at the Lissispin dispersal sale for Brendan Clarke & family.
Rushwee Lar Hazel (lot 38) sold for €3,045. She is projected to yield over 10,000kgs milk, 759kgs milk solids this lactation, having calved on October 21st.
Rushwee Kodak Breakout 28, 4th calver (lot 31) sold for €2,625 and her heifer calf sired by Longview Reliable (LWR) sold for €840, a combined price of €3,465 for mother and daughter.
Rushwee Edelweiss Elm 100 (lot 97) and Rushwee Sol Beatrice 95 (lot 108) topped the prices for dry cows both selling for €2,520. In her previous lactation as a heifer, Edelweiss Elm 100 recorded 7,900kgs milk, 4.73% fat, 3.67% protein. Rushwee Sol Beatrice 95 sold with an EBI of €111.
A large crowd of farmers packed the ringside throughout the day, testament to the appeal and quality stock on offer. Buyers travelled from all parts of Ireland with all four provinces represented including many dairy men from Northern Ireland. The herd has won many achievements over the years including success in the local North Eastern Friesian Breeders Club and Young Members Association (YMA).