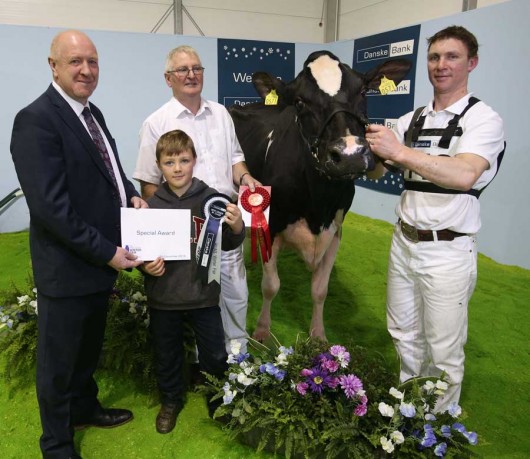 Desmond Dundee Embrace wins Champion Holstein and Supreme Interbreed Champion at RUAS Winter Fair. This is her second time claiming the title, having previously been crowned Champion in 2014 for joint owners Roy Cromie and Philip Jones. Reserve Holstein Champion and Interbreed went to Liam and Sandra Murphy’s Evergreen Duplex Ebony who was Supreme Champion 2015. There was a large turnout of southern breeders who had a very successful show in winning many of the classes throughout the day.

The Winter Fair is firmly established as the flagship seasonal event for the Northern Ireland dairy sector and the move to the new venue, located further south of Belfast, provides for ease of access with the result that a large contingent of visitors from the south were among the throng in attendance.

The Champion and Reserve Champion cows are both currently in their 5th lactation which was referenced by the judge who stated how this is testament to the breed and breeders, and is further affirmation for the longevity within the Black & White population.

Champion, Desmond Dundee Embrace was 1st in the Production class and was also Best Udder. The judge commented “She has great style and elegance and given the fact that she is on her 5th lactation, her quality is all the more admirable”. She is classified EX94 3E and completes eight generations of VG/EX maternal breeding. Her daughter by Goldwyn Dalevalley GWY Embrace 2 was also exhibited at the show and won Reserve Champion Heifer and placed 1st Senior heifer. 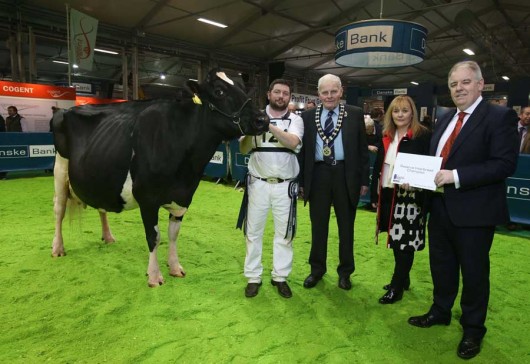 For Liam and Sandra Murphy it was a very successful return to the Winter Fair, with Evergreen Duplex Ebony placed 1st in her Senior cow class and also Best Udder. In winning the class the judge remarked “She is a beautiful dairy cow. Tremendous spring of rib, very pleasing rump structure which gives her the advantage.” She was also Exhibitor Bred Champion. 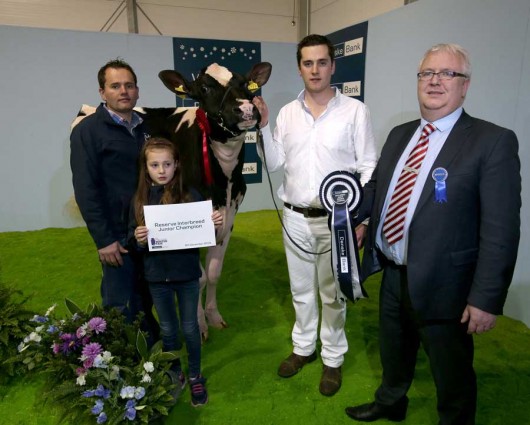 Paul Trapp from Wisconsin, USA, was tasked with judging duties, taking charge of Handling classes and the various breed classes throughout the day. Paul is a noted judge in the US having judged in 20 different states and also internationally, including Argentina, Australia, Brazil, Canada, Japan, Mexico, and the UK. In 2013 he travelled to Ireland to judge Emerald Expo. He has twenty years experience as a sire analyst and currently works with Semex as part of its sire acquisition team. His reason giving on all classes was delivered succinctly and enhanced the overall spectacle. Before tapping out his Champion, Reserve and Honourable Mention he commented “Judging the Ulster Winter Fair has been an honour and a privilege. This truly is a marquee venue having tremendous facilities. It has stirred an infectious buzz and atmosphere all day long. It is so obvious to me that you all have a tremendous passion for your cows and for great cattle”.

The Young Members (YMA) were very much to the fore in the Handling classes; 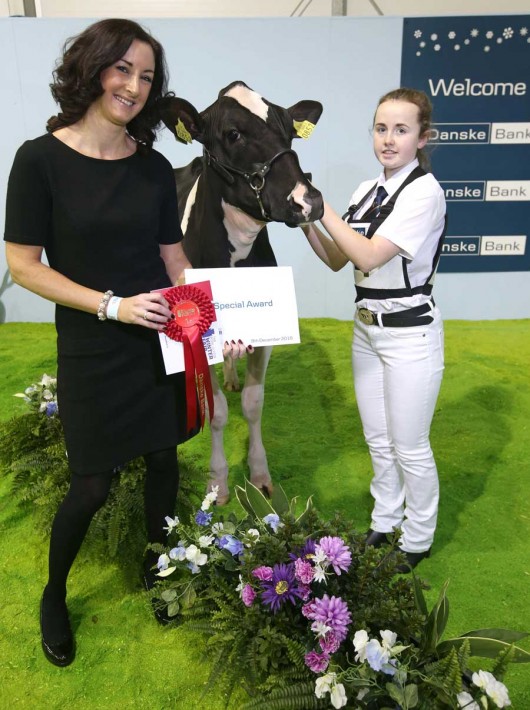 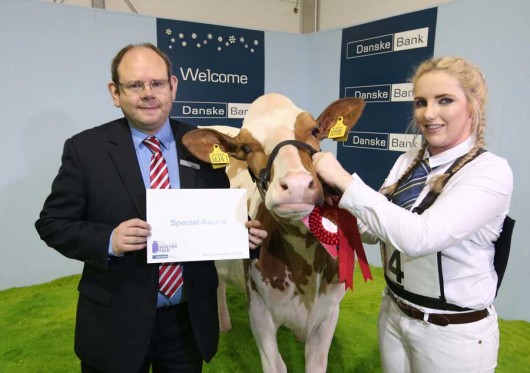 David Perry, President-elect of Holstein UK, and John Martin, Secretary of the Northern Ireland club, were among the large attendance. There was a large commercial presence including 200 trade stands representing a cross-section of agri-business.