The dispersal of the youngstock of the Mohoncross herd on Saturday 21st September witnessed a brisk trade for quality stock. West Cork dairy farmers were out in force for the opportunity of purchasing seed stock from this outstanding herd. 107 lots were on offer.

The herd has been bred over the years by owner Jerry Hegarty who is held in high regard by fellow breeders for his eye for quality, a master judge and superb stockman. The herd has been augmented over the generations with purchases from the famous Grove herd in Wales and embryos from the noted herds in Canada and the USA, as well as top Irish herds. 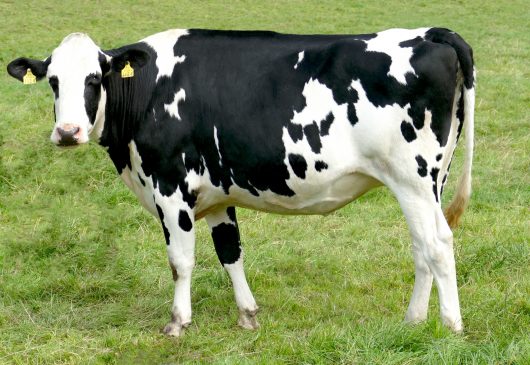 Mohoncross Pet 41A, the top selling animal on the day

The average for the in-calf heifers was €2,046. Twenty two heifers made over €2,000 each. The top price was €5,200 for a potential sixth generation excellent springing heifer calving at the end of the month – Mohoncross Pet 41A bred by Doorman tracing back to the PET family from Grove. She was carrying to a sexed straw of Woodcrest King Doc.

Mohoncross Dawn 70A sired by Walnutlawn Solomon and carrying to a sexed straw of OH-River-SYC Crushabull with potential for 11th generation VG/EX made €3,200.

The average price for bulling heifers was €1,380. The top price was €2,500 for Mohoncross Dawn 68. Bred by Plain Knoll King Royal tracing back 11 potential VG/EX generations to the Dawn family at Grove. Her half-sister bred by Seagull-Bay MVP made €2,050.

The average price for spring calves was €1,134. Four calves made over €2,000. The top price was €3,100 for an April born calf from the Dawn family. Sired by Walnutlawn Solomon from a potential 11th generation VG/EX.