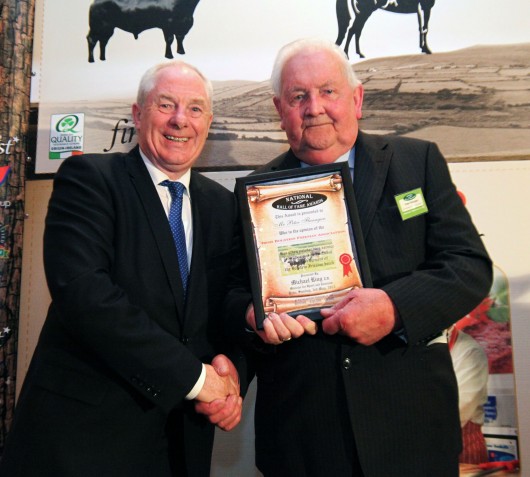 Peter Flanagan has been farming at Tubbertoby, Clogherhead, Co Louth, for the last 70 years with his wife Mary, his sons Paul & Adrian and daughters Guenedere, Ruth & Judith.

In the early years it was Shorthorns that were milked on the farm. The British Friesian was the upcoming breed in the late 60’s and early 70’s and as a progressive young farmer this new breed was crossed on the Shorthorn cows. Stock bulls from the Moneymore herd, namely Moneymore Victor and Moneymore Nation both of whom had a positive influence on the herd.

Purebred Friesian stock were also purchased in both Northern and Southern Ireland from prominent cow families and the process of grading up and registering the herd with the British Friesian Society was begun (BFCS). The herd continues to register stock with IHFA.

Keen to progress the improvement in the herds’genetics several herd sires were purchased in the UK throughout the 70’s, from the Whinhill and Lavenham herds. By the late 70’s the first talk of Holstein was emerging from North America. To progress the herd and with the promise of increased potential for milk the first tentative steps were taken by using the Holstein bulls available from AI in Ireland, namely Glenbrook Northern Star (GNR) and Roybrook Star(ROK). On seeing the benefits in their progeny the decision was made to join a group of prominent breeders in a syndicate to purchase two pure Holstein bulls in Germany these being Hyline Shiek and Hyline Valiant.

In the early 80’s he started showing and success was achieved at various local shows like Virginia, Trim, Dundalk and also the RDS Spring Show.
Boosted by these early successes in the show ring and clearly bitten by the show bug several purchases were made in Canada of elite young calves from world class cow families. Many of these purchases are still the bedrock of the herds’ top cow families today.

Peter was also a proud founder member of the North Eastern Friesian Breeders Club and served on the committee as Chairman, Secretary and Chairman of the Clubs Herds competition which then numbered over a hundred herds.

Despite the numerous achievements stated above, valued above all, are the many friendships and happy memories made over the years through the common love of the cow, at meetings, field evenings or club trips at home and abroad.