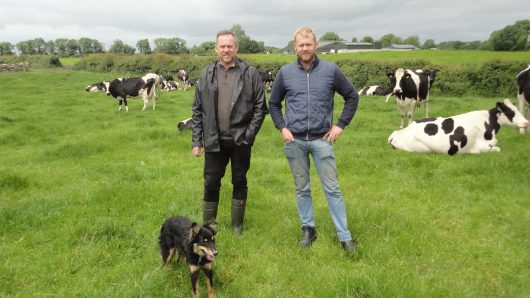 Robert and Paul Thompson of the Creenagh Herd

John A.F. Thompson and sons Robert and Paul farm in partnership, milking a herd of approximately 150 pedigree registered Holstein Friesian cows. The family farming partnership has two distinct “homes”, with the milking herd managed by the brothers located at Redmonstown, Castletown Geoghan in Co. Westmeath, while dad, John, rears all the calves and youngstock to the point of calving, on the family farm at home in Rooskeythompson, Mohill, Co. Leitrim.

Keen to broaden horizons, in 2003 the family purchased the 78-acre Westmeath farm with ancillary farm buildings. This also enabled them to make provision to support two aspiring brothers with a strong work ethic and passion to follow their farming dreams. In May 2006, following the completion of key infrastructure projects including the construction of a new milking parlour, Robert and Paul made the move. They began to set about their own new dairy farming operation, located seventy-two kilometres from the home farm. In the time frame since, they have almost trebled the size of the milking herd, growing the herd incrementally from within having started with a base of 60 cows.

Output from the herd last year was 750,000 litres, 4.05% fat, 3.50% protein. A total of 151 cows went through the parlour with surplus stock sold over the year. 60% of the herd consisted of first and second calvers last year, reflecting the recent expansion in numbers. Average milk recorded performance was 6,157kgs milk, 440kgs milk solids, 3.67% fat, 3.50% protein per cow. Currently there are 36 VG/EX cows on IHFA conformation in the herd. It’s a predominantly spring calving herd with 15% of the herd calved over autumn/winter to fill co-op contract. Grazed grass is the cornerstone of the farm, viewed as the perfect vehicle to operate a healthy margin for the farming system. 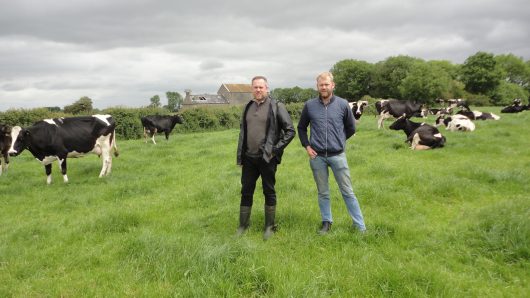 Robert and Paul Thompson of the Creenagh Herd

Reflecting on the move to set up their own farm and the progress made in the seven years since, Robert and Paul gather their thoughts.

“It has opened up new horizons and possibilities that simply weren’t available to us previously. The farm at home in Mohill is 56 acres, with limited opportunity to acquire adjoining land blocks, so any possible expansion was difficult to ever imagine. From a young age both of us were always very keen to pursue dairy farming as a career. With a view to setting up elsewhere we looked at a number of options and walked a couple of farms before this Westmeath opportunity arose. We firmly decided it was the one for us.”

The farm purchased was a 78-acre grazing block with infrastructure requiring modernisation. “It’s a fabulous farm for growing grass. The length of the grazing year is extensive and immediately we noticed a huge advantage in this regard. We are now also less weather-dependant; the soil type is fundamentally sound meaning even when there is prolonged rain the ground requires little recovery time.”

The list of infrastructure work built and completed includes a new winter accomodation unit with 116 cubicles, completed in two stages, and a 12-unit swing over parlour. New farm roadways were built, practically the entire farm was reseeded and a new paddock system was implemented. In addition, an improved water pipe system for the entire farm was also installed. Progressing further, a 74-acre block was subsequently purchased in 2018 and is used for silage and zero grazing.

Growing up and working with a pedigree Holstein Friesian herd from a young age, the brothers developed a great understanding and appreciation of the unique merits of the Black and Whites.

“Why go backwards as regards breeding” comments Robert. “It’s important to not lose sight of the inherent value of their stock. At most auctions and sales it is the better quality cattle who are backed by generations of performance records who will command better money.

“Dad registered and graded up the herd when we were very young. The herd is built on a small number of very successful cow families. The consistency of these families served the herd so well over the years and continues today. Expansion in numbers was achieved from within the existing herd. As we take the herd into a new phase, we will build on the high genetic level that Dad achieved and seek to make further continued gains.

“Our cow type preference is medium sized cows with the functional traits to last a long time in the herd. Good udders and sound feet and legs are very important. Our optimum yield level is 1,500 gallons (6,800kgs). The cow type to achieve this must have the capability to achieve this production from grazed grass, the ability to respond to any supplementary feed and to also have good fertility as after all it is a block-calving herd. We have managed to accumulate increases in overall protein % and the next stage it to achieve 3.60% protein for the herd. We will focus on achieving this using a combination of breeding intensity and grassland management.”

Sire selection policy is currently to use bulls having an EBI of at least €200, +0.07% protein, +25kgs milk solids with positive conformation traits all round. Only PED status AI bulls are used. In addition to reviewing the PTAs of bulls, the performance of the maternal generations behind each bull is considered in a broad and wide-scoping approach. Bulls used currently include Westcoast Perseus, Westcoast Yamaska, Sterk Kiss Kyteman and Ballygown Albert. The brothers are impressed with the performance of milking daughters by De-Su Mucho, St. Louis, Ballydehob Pat, Clondrohid Black Lightning. Daughters by bulls such as Ramos, Vosac Man, Spock and Ruud had a very positive impact on the herd.

“Classification helps us to make desired improvements in cow functionality.” is how Paul replies when asked what is the benefit of using the IHFA classification service. “We must always protect herd type. If it’s not being measured then it’s not possible to identify trends or take effective action accordingly. Quite honestly, we value the independence of the service, I think this is often overlooked by some.” 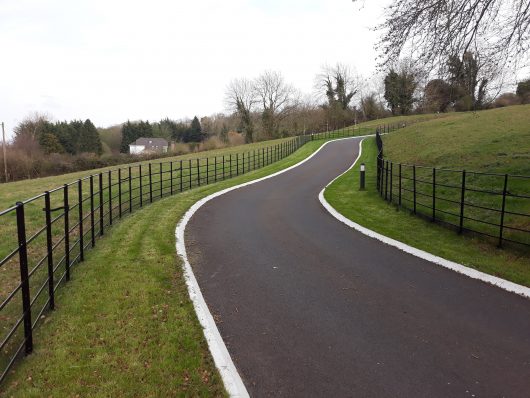 An example of the brothers’ enterprise – Ardagh Estate Fencing

The brothers’ innovation, entrepreneurial spirit, strong work ethic and desire to take charge of their own professional destiny extends beyond the dairy farm. They have set up a separate business in a creative initiative to supplant further added value. Ardagh Estate Fencing provides bespoke cast iron estate fencing and much more. Taking inspiration from the traditional cast iron fencing of Ardagh Heritage Village, the brothers up-skilled in this centuries-old craft and founded the business based on their own hand-made creations and installations. An existing farmyard shed was converted into a purpose-built workshop. The list of items offered for sale includes entrance gates, posts, pillars, tree guards and accessories.

The West Midlands Friesian Breeders Club is integral to the Thompson family. John is the current club Treasurer. Paul comments “There is a very enjoyable social aspect to the club. It’s a platform to meet like-minded breeders and we can all draw on each other’s experiences to take learnings. The club covers a wide geographic spread so you get to meet people from different areas.”

Last year the club held a field evening on the farm and the family were delighted to host fellow club members for the event. “While at the outset initially it seemed like extra work to take on but the reality is that it does you good to open up the farm and invite others in” says Robert. “It was a good incentive to get jobs finished that otherwise would have been left on the long finger. Things ran very smoothly on the night. We were delighted and people were very generous with their praise and comments”.