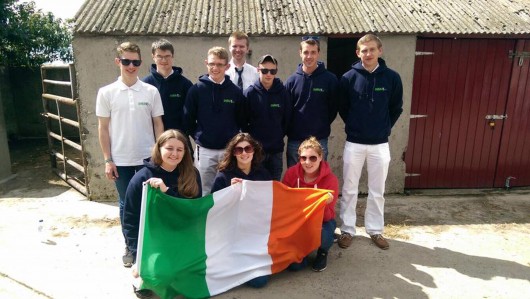 On the Friday evening of the August Bank Holiday weekend, the team for the HYB rally began their journey to Greenmount College for the highly anticipated Rally Weekend. This year the Northern Ireland HYB were the main hosts of the popular event.

The first evening consisted of social events to welcome the competitors and allow everyone to settle. While the organisers were waiting for all participants to register, a farm tour of Greenmount was taking place throughout the course of the evening. The farm consisted of fantastic facilities and was worth a visit while on the campus. For the remaining of the night, a disco took place in the marquee which allowed everyone to meet with other teams from across U.K and Northern Ireland.

Saturday morning began with an early start with everyone having to be up for breakfast and ready to go onto buses for 9. (Mind you, we were all happy to get off the buses once we arrived at the farm). The day started with a trip to Ard Holsteins on the farm of Andrew Patton. The stock judging took place here for the first half of the day. Representing the Irish for the senior stock judging was Owen Laffen and Jason Helen and in the junior section, Megan and Kane Boal. Each had to judge two classes and give reasons to the judging panel on their placings. While the stock judging was taking place, the remainder took part in various workshops on different aspects of farming. This including animal nutrition and animal reproduction.

Once the stock judging was complete it was straight back onto the buses to take part in the “Total Knockout” in Greenmount. This was a large selection of obstacle courses in which each team competed against each other. The team thoroughly enjoyed and many laughs were had throughout. Unfortutely, we didn’t place in this event, although we were pretty convinced we had won!! One of the main highlights throughout the weekend was the fancy dress competition on the Saturday night. The theme this year was “under the sea”. The team with major thanks going to Clodagh Helen (our mammy for the weekend) for coming up with the idea of the cast of the Titantic won the event. We were delighted and very lucky to have a boat to allow us to survive the foam party!! We had a lot of heads turning when we arrived, especially for Rose!

A few tired heads later, Sunday morning quickly approached and the main event of the weekend was the Field-to-Foto in Ballymena Mart. On arrival, each team got their calf and a quick run-down of the day’s events were given. Each team worked very hard throughout the event and the results showed. Kane Boal of the B team, placed 2nd in his handling class and Megan Boal also of the B team won the photography section. This was a fantastic achievement so well done to both.

Overall the Irish representatives had a great time and thoroughly enjoyed the whole experience of the weekend. The group bonded really well and some great memories were had. The weekend wouldn’t have been such a success without the ever helping hand of Clodagh Helen. Clodagh travelled with the team and was always at arm’s reach to meet our needs, not only was Clodagh our mammy for the weekend, she had to step in as a minder, bodyguard and a doctor with all of her supplies!! A major thank you goes to Clodagh from everyone who took part, your enthusiasm was showed in all aspects of the weekend.

Also, the team would like to thank Avril Helen and the IHFA for all of their help in preparing the team for the weekend. It was a fantastic learning experience. The team found the experience a great way in building inter-club relationships, that in no doubt with last throughout the YMA