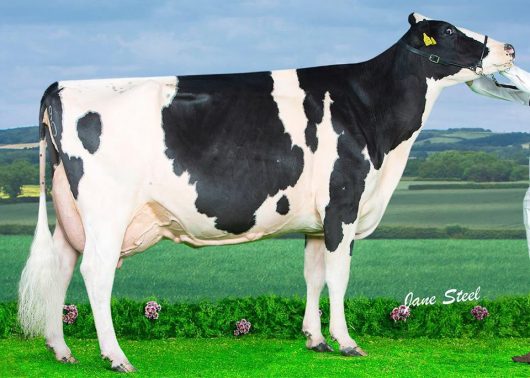 Robert and Sylvia Helen, and their son Jason, of the Eedy Holstein Friesian herd achieved a milestone when Eedy Destry Acclaim recently classified EX95 – completing two generations of EX95 scored home-bred dams. It is a major breeding accomplishment, underpinning the power and strength of the maternal line and cow families. The Helen family farm is located 3 kilometres outside Clonakilty, situated to the north west of the local seaside and tourist town with the surrounding area a hotbed for dairy farming. As Robert commented “Having one cow good enough to attain EX95 is some achievement not to mind two. So it’s a real pleasure and a highlight for both mother and daughter – both home-bred – to achieve this standard. Both cows have been so easy to manage, having a placid nature and ability to do their work at their ease”.

Classified VG87 as a heifer with a VG87 Mammary she developed and matured with each subsequent parity, VG89 second-calver, EX92 third-calver, EX93 fourth-calver.

She also demonstrates high production having averaged 12,000kgs milk, 894kgs milk solids per lactation in four completed lactations to date. Calved-in with her fifth in early April this year, she is projected to 10,601kgs milk, 773kgs milk solids, 3.83% fat, 3.47% protein. Her progeny in the herd includes a Brenland Denver sired heifer calf and two Walnutlawn Solomon daughters, one born in May 2018 and a full sister born in September 2019. 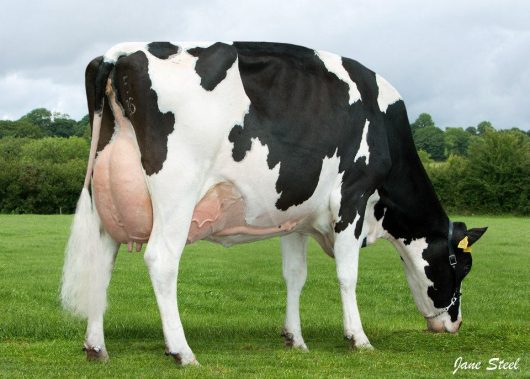 Her dam – Eedy CIX Acclaim EX95 3E
Eedy CIX Acclaim, a Cradenhill Eden daughter, was a tremendous power house of the Eedy herd. With a depth of quality to score EX95 on classification inspection she was an all-rounder, also combining high production with showing style, winning champion titles of local shows including Bandon and Clonakilty shows. In her six completed lactations she recorded an average yield of 11,127kgs milk, 790kgs milk solids per lactation. Her functionality for longevity and productivity is evidenced by her classification composite scores –

The impact of her legacy on the herd is multi-dimensional, as her ability in consistently breeding progeny to a high standard is borne through; 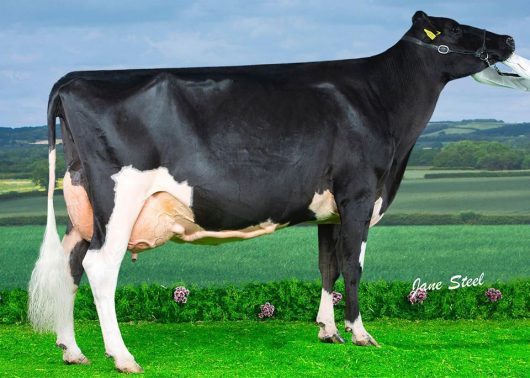 Prior Generations
Kilgarriffe Accalim ET VG88 was the seed stock of the Acclaim family. She was the fruit of embryos purchased and imported by both Robert and his brother Richard, Kilgarriffe herd. The donor dam, Q G Aclaim ET VG87, was a Mascot daughter with ten embryos registered by Robert and Richard sired by Parker Aero Wade and Holim Stans Tornedo ET VG.

The cow family, tracing back to Conant-Acres Mark Anna EX92, a second generation “Dam of Merit” from Ken-Ric Bell Adrian EX92 in the USA – a lineage replete with high production, top conformation scores and a stellar mix of modern high-ranking Holstein sires. 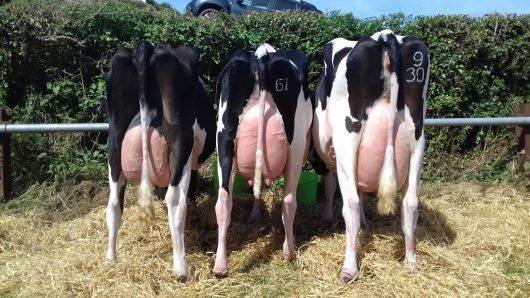 Both EX95 mother and daughter have won Best Cow Award in the Cork Club Herds Competition.

Numerically this cow family, bookmarked by a double generation of EX95 dams, is now at 11 generations of VG/EX breeding currently in the Eedy herd. With the strength of the maternal line so apparent and with youngstock waiting in the wings, it seems that number is on the way up!