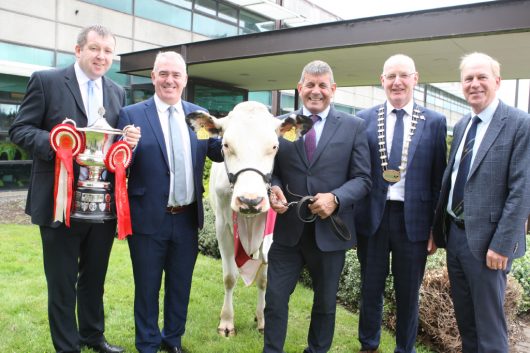 Commending the companies on their successful collaboration, Minister Doyle said, “The event is well known for its prestige within the pedigree dairy breeding community. It consistently attracts the best breeders in the country to compete against each other in a competition that recognises cows with both good commercial milk production practices, outstanding appearance and show ring characteristics.”

Holstein Friesian breeders who enter will have their cows ready to be judged at the Virginia Show in Co. Cavan on 21st August. Awards will be presented on the day across several categories including Junior Cows in their second lactation. The top place of Overall Champion attracts a €2,500 prize; followed by €1,000 and €500 for Reserve Champion and Honourable Mention respectively. The Best Junior Cow category has prizes worth €750 in total. The popular Best-Heifer-in-Milk category carries a fund of €1,700 with 1st place worth €500. Cash prizes will also be awarded for Highest Protein Content, Best EBI and Best Exhibitor-Bred Cow. The awards for Best EBI and Best Protein emphasise the most profitable factors for both breeding dairy herd replacements and milk production.