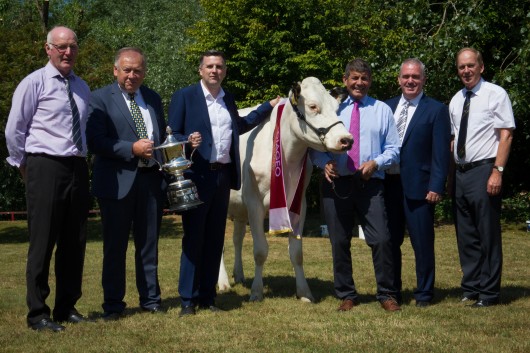 The 35th Diageo Baileys Champion Dairy Cow Competition was launched today by Minister of State for Food, Forestry and Horticulture, Andrew Doyle T.D. at the Baileys production site in North-West Dublin. The competition finale takes place on 22nd August at the Virginia Show in Co. Cavan and carries a prize fund of over 10,000 Euros. Cash prizes are available across several categories including Junior Cows in their second lactation. Entries are now open from Northern Ireland and the Republic of Ireland. Last year’s winner was Sam McCormick from Co. Down.

Congratulating both companies on reaching a 35-year milestone, Minister Doyle said, “I commend Diageo and Glanbia Ireland for sponsoring such an important event that is now in its 35th year. This event is the most prestigious competition for Pedigree dairy stock, with strong entries from across the island. It’s an opportunity for the best breeders in the country to compete against each other for a competition that rewards cows with both good commercial milk production practices, outstanding appearance and show ring characteristics. Better breeding has a key role in developing our vital export led Agri-food sector.”

The top place of Overall Champion attracts a €2,500 prize; followed by €1,000 and €500 for Reserve Champion and Honourable Mention respectively. Cash prizes will also be awarded for Highest Protein Content, Best EBI and Best Exhibitor-Bred Cow and Best Junior Cow. The popular Best-Heifer-in-Milk category carries a fund of €1,700 with 1st place worth €500.

Diageo Ireland’s Liam Reid, Director of Corporate Relations, said, “we look forward to marking 35 years of this competition with the dairy breeding community and our cream suppliers Glanbia Ireland. We look forward to seeing the island’s top Holstein Friesian breeders out in force on this special occasion.”

Awards for Best EBI and Best Protein emphasise the most profitable factors for both breeding dairy herd replacements and milk production. Martin Tynan General Manager of Glanbia Ireland Virginia commented, “The Diageo Baileys Champion Cow rewards breeders who combine good conformation in their animals with exceptional milk production capability. As suppliers of the Irish cream for Baileys we see it as the perfect way to celebrate the long-standing partnership with our customer Diageo.”

Conditions of entry are available HERE. Entry forms are available by calling Brendan Smyth ++ 353 (0)87 2560952, or by visiting the Virginia Show website http://www.virginiashow.com/championcow/ Follow the conversation on Twitter @BaileysCow #DiageoBaileysCow. Find us on Facebook at Baileys-Champion-Dairy-Cow