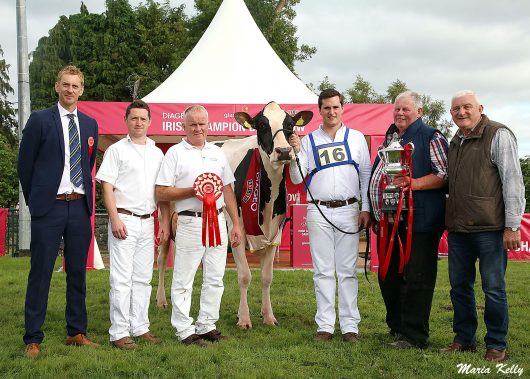 Drumlina Atwood Megan reigns Supreme at the prestigious Baileys All Ireland show now in its 35th year, jointly sponsored by Diageo and Glanbia.

Drumlina Atwood Megan is Queen of the Baileys Championship for 2018 took the top honours. Co-owner of the cow David Boyd joked afterwards that it was a case of “The bridesmaid becoming the bride today”. Megan is owned by a syndicate of five; David Boyd, Sandy Moore, Denis O’ Neill, Brendan Greenan and Rory Timlin. Her quality is such that she has had many showing successes recently including Champion of Balmoral and Reserve Champion Tullamore National Livestock Show.

Milliedale Dusk Rhapsody was crowned Reserve Champion for Donal and Kathleen Neville, Croagh Co. Limerick, rounding off a week of achievements for the treaty county as All-Ireland hurling champions. Now in her 5th lactation she is a tremendous production cow having produced over 56,000kgs milk, 4,232kgs milk solids. Classified EX95 2E on conformation, she completes 14 generations of EX dams.

Sprucegrove Apples Peggy won Honourable Mention for Seamus and Aidan Foody, Crossmolina, Mayo. Peggy also won the Heifer In-Milk class, it is highly commendable for a heifer to perform so well in competing with quality mature cows in the Championship line-up. 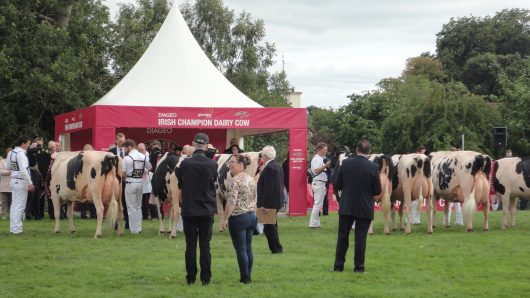 The Virginia Show, County Cavan, was again a marvellous host to the Baileys Champion Cow with its impressive showgrounds and huge crowds in attendance being a fitting backdrop.

With a total prize fund of €10,000 on offer the level of breeder interest extended far and wide throughout the island including counties Antrim, Armagh, Louth, Donegal, Monaghan, Mayo, Kerry, Cork, Kildare, Wexford and Carlow. Judge David Hodgson from Cumbria, UK said “The quality of cows turned out is so impressive, the quality is such that it is befitting of any European show”.

An Taoiseach Leo Varadkar, T.D. was present as the cows entered the ring and the large crowd of onlookers got a glimpse of the tremendous quality of cows. The Heifer In-Milk class was first to be judged followed by the Junior Cow class (2nd calvers) and then moving on to the ultimate prize – the Baileys Champion Cow – boasting an impressive total entry of 22 high-calibre cows. Other awards were also conferred in recognition of EBI and Protein Production. 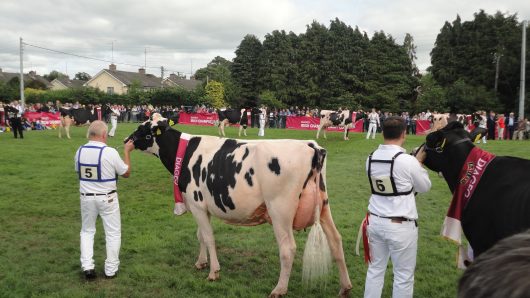 Described by some as “one of the best Baileys Heifer classes ever”. For father and son Seamus & Aidan Foody, Crossmolina, Mayo, this was a double Baileys success with Sprucegrove Apples Peggy winning the Heifer In-Milk class and her dam, who was also exhibited, later winning the Protein Award. In his praise of the heifer the Judge commented “She oozes so much style and balance with a hard top line and is so clean through her bone”. Calved since early December she is scored VG87 on IHFA classification. Baileys Protein winner Sprucegrove Lavanguard Peggy EX91 is currently in her third lactation, she has produced over 1,500kgs protein to date.

Describing the Junior cows as an “outstanding class”, Judge Hodgson was fulsome in his praise. Hallow Atwood Grace had won Emerald Expo Supreme Champion at the same venue earlier in the year and her quality on the day was such that she got the nod for 1st place with the judge saying how much he “admired her ring presence and said that she tracks so well on quality legs & feet”.

He complimented his 2nd placed cow, Kilwarden Lavanguard F Dixie for Brochan Cocoman saying that “she has a big future ahead”. 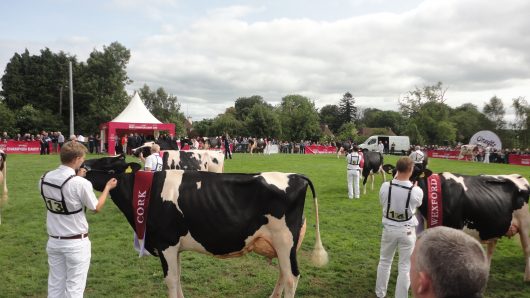 The anticipation built up as all 22 high-calibre cows were closely scrutinised for the Baileys finale. After his deliberations the judge selected ten cows and lined them up in the middle of the ring which comprised Sean Faulkner’s Ballyelly Mogul Carmen in addition to the top three of both previous classes. Prior to his tapping out his Champion, Reserve and Honourable Mention selections the Judge surmised his task

“The Baileys Champion Cow is such a prestigious competition, it’s reputation for quality as a hallmark is so well known in the UK and further afield. It has been an honour and a privilege for me to be invited to judge today and I want to compliment every breeder for the quality of cows in front of me today. My selection of ten cows exemplify balance, dairyness, strength, good legs & feet, they have that style which catches your eye and you have to admire their quality. Fundamentally these cows are so correct for the functional dairy traits”.

He then tapped out Drumlina Atwood Megan, with Brendan Greenan on the halter, for Champion praising her “dairy character and balance”, followed by Milliedale Dusk Rhapsody with Thomas Neville on the halter for Reserve Champion hailing her “awesome legs & feet, she is so well put together” and Sprucegrove Apples Peggy for Honourable Mention with Denis O’ Neill on the halter.

Evergreen Gala 6 won the EBI Award presented to owners Liam and Sandra Murphy, Bagenalstown, Carlow. The Monamore herd was once again well-represented in the Baileys with two  entries, the organisers were quick to praise Tom Kelly and family on the occassion of this the 35th anniversary year for having exhibited cows every single year since the first show.

Robert Murphy, head of Baileys global supply said  “The Baileys Champion cow is one of the best success stories to ever have emerged from the island of Ireland. Its popularity with consumers is such that it is exported to 180 markets world-wide. So much of its success is due to its unique ingredients and tribute to Irish dairying and the quality of cows producing the cream for Baileys”. He noted that breeders from both jurisdictions of the island were represented and complimented their “passionate spirit”.

Glanbia Chairman Martin Keane praised the suppliers for the continued growth within Glanbia which now totals 2.5 billion litres of milk annually. Reflecting on the quality of stock exhibited at the show he used “Excellence” as a theme hailing the “breeding excellence” of the breeders involved and said that the task of the judge had been to sort “degrees of excellence”.

Mairead McGuinness M.E.P. praised the community spirit of the Virginia Show saying that she was so impressed by what is being achieved by the community. She complimented all the breeders involved and likened the quality of stock to the quality of the final product saying that both were the crème de la crème of all that is good about an Irish dairying success story.