160 cows and heifers are calved in annually with surplus heifers offered for sale every year. Last year we milked 146 at peak, of which 40 were autumn calving and the remainder calving in the spring.

Milk production on this farm began in 1994, having previously been operated as an outfarm. Quota was purchased at every opportunity along the way, paving the way for gradual expansion and progress.

The initial herd consisted of 56 cows and was graded up with IHFA, attaining pedigree status in 1998. In 2002 the herd was classified for the first time and we haven’t looked back since. 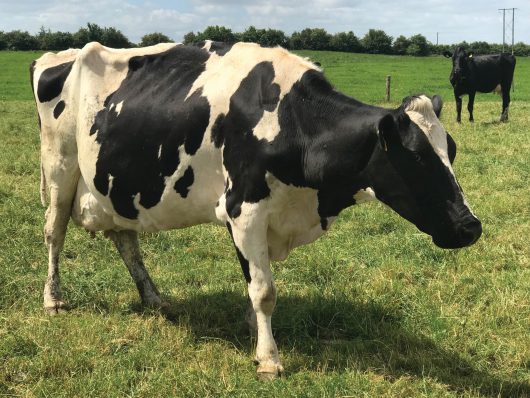 IHFA pedigree registration and classification has strengthened cow families, identifying those with the functional traits to last and to breed replacements from. Using the information provided has helped the herd to make good progress with legs and feet and also udders. In particular I am thankful to Paul Boal who encouraged us greatly in the early years and his advice proved to be solid. Functionally correct cows have helped make strides over the years in efficient milk solids output.

Ballyroberts Marina 553 EX94 6E. In her 9th lactation this year she scored EX94 mammary, EX94 rump, EX93 body, EX92 feet & legs. She will shortly calve in with her 12th calf, having had one set of twins and is due to commence her 10th lactation around the same time as her 12th birthday. She is on track to achieve IHFA Diamond Cow status.

Her daughter Ballyroberts SUW Marina EX91 2E is in her 7th lactation, projected to produce 9,479kgs milk. She has protein to 3.54%. Fertility is strong! She calved in as a heifer on January 30th 2012 and calved her seventh on January 26th 2018.

Ballyroberts GIO Supreme EX92 5E now in her 8th lactation. She produced over 9,000kgs milk with 3.60% protein in two lactations. She has been a regular breeder calving her first February 24th 2011 and calved-in with her 8th calf on January 13th this year.

Ballyroberts Yacht 955 VG87 now in her 4th lactation. As a second calver she recorded 8,895kgs milk, 656kgs milk solids, 3.79% fat, 3.59% protein. This family take the name as a nod to the reputed sire of yesteryear Merston Yachtsman.

Membership and being involved in the Cork Club is a great benefit. It is a very progressive club with knowledgeable people. The Club Herds Competition is a wonderful event, it encourages you to try and improve year after year. The herd has won individual prizes back along and it was fabulous to have won 1st place in the Senior Category in 2016.

The Field Evenings are a fabulous way of visiting good herds and experiencing fantastic management. It was an honour to host the Cork Club Field Evening on June 27th. Any nerves beforehand were soon replaced with enjoyment and a sense of pride. John Kirby was Master Judge and we are thankful to John for his contribution and also to Shane McHugh for his helpful advice. Other Club events that we really enjoy are the National Dairy Show, Millstreet and the AI information nights.

The IHFA National Open day is a superb event and we try to attend as many as possible across the country. It is a great shop window for the breed.

The full piece on Breeder Profiles can be read