Luxembourg
Further to Bluetongue Alert Number 1 of 2020, issued on April 2nd, Luxembourg confirmed an outbreak of BTV 8 on 7th September 2020. Clinical disease was reported in 2 animals in a herd of 435. This is the first time Bluetongue has been reported in Luxembourg since 2008.

France
France has reported 6 more outbreaks of BTV 8 with mortalities in both cattle and sheep.

Greece
The disease continues to spread south and Greece reported its first outbreak of BTV 4 since 2016 on the mainland at the end of July. 131 outbreaks have since occurred with 54 deaths reported in sheep and goats

The map below shows the distribution of Bluetongue in Europe currently 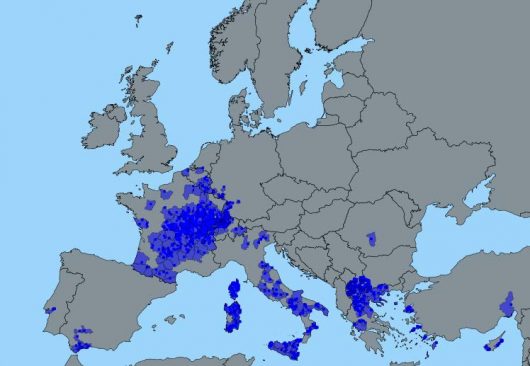 Map courtesy of the European Commission

Measures to prevent Bluetongue coming to Ireland
Ireland remains free of Bluetongue and as we are still in the high risk period for Bluetongue transmission, it is important that we continue to implement measures to keep the disease out, particularly around the importation of ruminant animals from affected countries.

Bluetongue is spread between animals by midges and in Ireland the period of midge activity is between late March up to early December each year. 90-95% of the midge species in Ireland are capable of transmitting bluetongue. The importation of bluetongue infected animals represents the biggest risk of the disease entering Ireland.

Farmers, practitioners and other relevant stakeholders should be vigilant and ensure that they are fully aware of the presenting clinical signs of Bluetongue in both cattle and sheep, and that they report any suspicion of disease to their Veterinary Practitioner or Regional Veterinary Office (RVO) without delay. In addition anyone importing ruminant animals into Ireland should consider the following risk mitigation measures:

Please read and follow these biosecurity guidelines before making any decision to import:

*PCR or polymerase chain reaction is a technique used in molecular biology to detect virus genome in this case. A test for BT is usually carried out on blood. A positive PCR test essentially means that the virus is present in the sample tested.

** DAFM implements a risk-based post import testing protocol whereby all ruminant animals originating from mainland Europe are sampled for BTV on their arrival in Ireland.