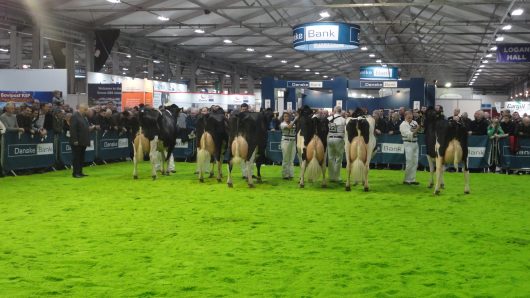 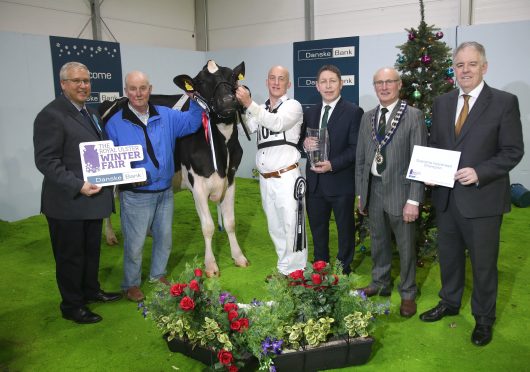 A festive Christmas backdrop within the impressive venue of the Eikon Exhibition Centre, near Lisburn was the setting for the 33rd RUAS Winter Fair. The recent move to the new venue located further south along the A1 towards Dublin has bolstered the number of southern breeders taking part and also the number of spectators in attendance. 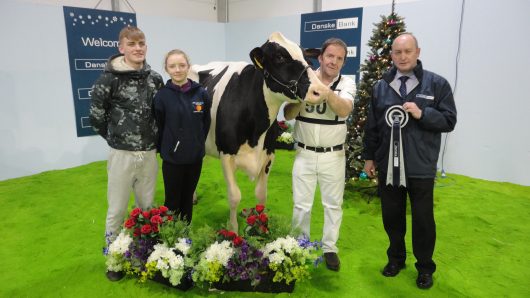 Cyril & John Dowling had further success in winning the 4th Calver Class with Clonpaddin Sanchez Fame. Bordermist Sanchez Fran won the Production Class for the Bordermist Syndicate with Philip Jones on the halter.

The Championship line-up was one of the most impressive line-ups. There was quality right the way through. Other cows in contention included Kilwarden Gold Bonnie for Brochan Cocoman, Ardnasalem Jenny for Patrick Colton, Greenlea MG Rhapsody for Padraic Greenan Sprucegrove Sea L Illinda for Aidan Foody. In the end the judge decided to go with a youthful selection for his Champion, Reserve and Honourable Mention.

Supreme Champion Baldonnel F M Sunshine is only 2 months fresh in her second lactation. Scored VG88 on IHFA conformation, she is bred from six consecutive generations of EX dams. In her first lactation she recorded over 10,000kgs milk and 660kgs milk solids (305 d). Her dam Baldonnel Jasper Sunshine ET EX91 2E was successfully imported an embryo from North America. In addition to winning her class she also won Best Udder.

Reserve Champion Hallow Atwood Carmen was singled out by the Judge saying “I love this cow, especially its her quality udder that is so pleasing and she has such a beautiful frame”.

Exhibited by Philip & Linda Jones she was 1st Senior Heifer. Her success in the Winter Fair follows on from a very successful showing year having won Honourable Mention and Champion Heifer In-Milk at the Tullamore National Livestock Show. She is classified VG87 on IHFA conformation and has a projected first lactation yield of 9,192kgs milk, 662kgs milk solids.

The Hallow herd also claimed Honourable Mention with Hallow Atwood Twizzle 1181. She won 1st Junior Cow and also won Best Udder. The Judge commented on her ring presence saying she has so much “feminine, dairy quality”. As a heifer she scored VG87 with VG88 mammary. Calved with her second at the end of September she recorded 8,210kgs milk, 686kgs solids, 4.75% fat 3.61% protein in her first lactation (305 d). Her dam Hallow Advent Twizzle ET EX96 4E is a noted show cow with many previous successes including the inaugural winner of IHFA Champion Cow of the Year.

Judge Brian Behnke complimented the breeders on the quality of cattle exhibited. From Wisconsin in the USA he is an accomplished judge with many previous International judging assignments including having previously judged the Red & White Holstein classes of World Dairy Expo. 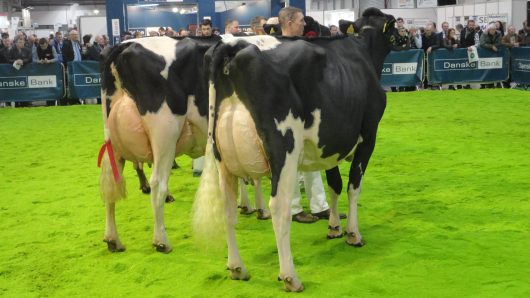