A warm, sunny late-March day was the backdrop to the 44th Irish Holstein Friesian Association Premier Bull Show and Sale. 32 bulls of quality were forward on the day and the catalogue offered broad selection to suit diverse farming systems. Minimum qualifying criteria for entry was applied. All bulls were prior inspected, genotyped and sire verified (DNA) and 60-day TB tested. 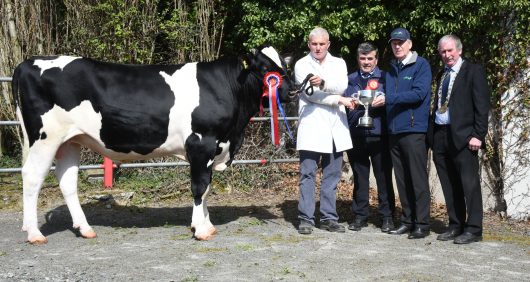 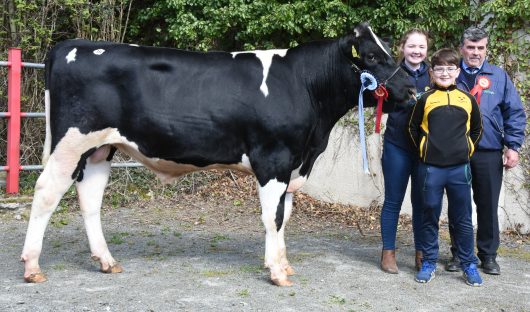 Lisnalty Harry (Lot 16) was Reserve Champion and was also first in his class for owner Paul Hannan. Sired by Stantons Applicable, this November-born bull is bred from the international Classic family, with his three nearest dams scored excellent. Harry has a milk solids PTA of + 32kgs milk solids and +0.04 protein%. He sold for €4,200. 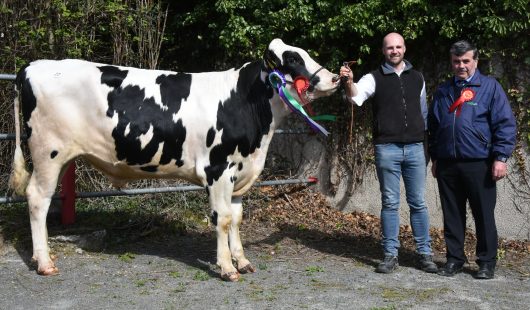 John O’Callaghan had Honourable Mention with Mountfarna Alexa (Lot 27). First in his class, Alexa is a January-born bull, sired by Cogent Peak Alex (FR2330) and bred from the Ruth family. His four nearest dams are scored to VG/EX on conformation, with his dam Mountfarna Eight Ruth EX90 having recorded 866kgs milk solids in her most recent lactation. Alexa went on to sell for €3,150. 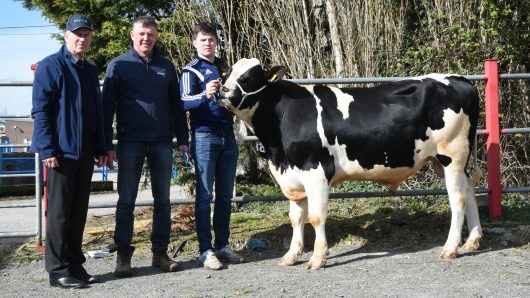 An overview of some other prices on the day;
Monamore Tremor (Lot 14) sold for €3,885. Bred from the noted Torch family, this bull is backed by eight generations of VG/EX dams including two dams scored EX94. His dam has averaged 8,400kgs milk, 3.68% protein in her first two lactations. Tremor has a PTA of + 2.50 for udders.

In a very successful day for Tom and James Kelly, the Monamore Herd twice achieved a sale price of €3,780 for bulls. Monamore Gandolf (Lot 1), bred from the Gay family with his four nearest Dams all scored EX. He was winner of highest EBI Award in his class. Monamore Franko (Lot 22) also sold for €3,780 is bred from the Fifi family and sired by Springhaven Otto (FR2351).

Hallow Sol Twizzle ET owned by Philip & Linda Jones (Lot 21), sold for €3,150. Bred from the very successful Twizzle family, his dam is Hallow Advent Twizzle 3 ET EX96 4E who won Supreme Champion Emerald Expo, Baileys Champion Cow and Reserve Champion RUAS Winter Fair 2016. She is a noted brood cow with many of her daughters having also been very successful. Sol Twizzle has a PTA of + 3.40 for Conformation.

Ryefarm Splendiferous (Lot 31), owned by Eddie O’ Flynn, sold for €2,310. Sired by Doorman, he is bred from four generations of VG/EX dams. His grand dam Ryefarm Principal Gaerochop EX94 6E is an IHFA Diamond Award cow for achieving 3,000kgs protein production. She is milking in her 10th lactation and is still going strong. Splendiferous has a PTA of + 3.00 for conformation and is +0.03 protein%.

Radney Nut (Lot 30) owned by Henry O’Keeffe sold for €2,415. Bred from the Odetta family, he is sired by Radney Steve (FR4098). His dam and grand dam have consistantly recorded lactations over 4.00% protein. Both dams are scored VG on conformation. This January born bull has a PTA of + 0.16 protein%.

Lisduff Nero (Lot 9) owned by James O’ Connor sold for €2,100. He is bred from the Neottie family at Lisduff with his nearest three dams all classified to VG/EX on conformation and having over 3.50% protein.

Judge on the day was Tom Murphy, Swiftsheath Herd. The sale was held at Nenagh Livestock Mart. John Kirby was steward. All prices quoted include auctioneers fees.