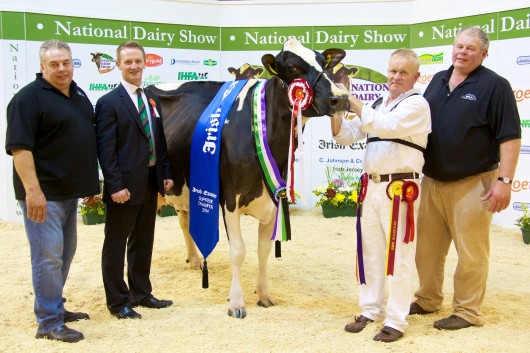 Glaslough Holsteins Reign supreme at the National Dairy Show!
“The best show of dairy cows I have ever Judged” were the closing remarks of the renowned Judge Iwan Rhys Morgan in summing up his Championship lineout.
This gives us a flavour of the Quality of animals at the 32nd National Dairy show. It was in the view of many of the connoisseurs of breeding the finest show ever and great credit to the organizers for the professional display and excellent promotion for the Black & White breed.

The 32nd show exceeded all expectations. Entries were well up on previous years with exceptional quality right down the lines in all classes. The superstars of Irish Holstein cattle industry competed in an atmosphere of excitement and true sportsmanship. Everyone commented on the excellent standard of the cattle.
There was a record number of trade stands once again, a testament to prospects in dairy farming.

The show commenced on the Friday evening with the finals of the YMA Showmanship League. This was a change in the format from previous years. Gary Jones from the “Hallow” Herd in Wexford was the master Judge. He has gained tremendous experience through the Slaney Club YMA as is a Handler judge on the EHRHC panel of Showmanship judges.

The Judge for the Day was Iwan Rhys Morgan from the famous “ERIE” herd in Carmarthen, South Wales. Iwan milks a herd of 140 Registered Holsteins and 45 Jerseys on the family farm with his father Edward. Iwan has judged young handlers and cattle shows in Ireland, Italy, U.K. and as far a field as Australia and New Zealand.
Judging on the Saturday started at 9am with the handler classes followed by the calf classes and then onto the milkers. It was a very full day with the finals at 5.30pm.

The show was officially open by Darragh Mc Cullough, presenter of the popular TV series “Ear to the Ground”.
John Barrett of the Laurelmore Herd was presented with the “National Recognition Award” a testament to his contribution to the Black & White breed over many years in breeding the famous “Laurelmore” herd.
The show also had a Farm Forum, sponsored by Zoetis on the topic “Getting your house in order”

The Quality of animals competing were tremendous especially in the Junior In Milk classes which augers well for bringing an Irish Team to compete at the European show in Coolmar France in 2016. 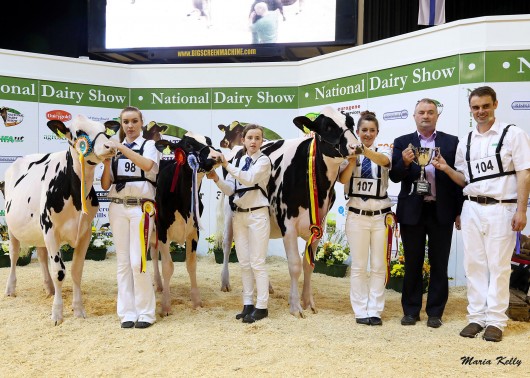 Junior Champion went to Donal &Tadhg Bourke with Ballinafinn Sid Seal May and Reserve to Brian Corley with Cornboro Iota Alice.
Intermediate Champion went to John Cooney with Hallow Bordermist Sid Fran, Reserve going to Paul Flanagan with Tubbertoby Atwood Fran.
The Confined cow Championship went to Hugh Dwyer with Elitestreet Stormatic Tory.
The show then moved to the Senior classes and the excitement in every class was palpable.
The Judge in his final lineout selected 5 cows worthy of the top award. The final pick were the Intermediate Heifer Champion owned by John Cooney, the 4year old winner owned by Cyril Dowling & Tadgh Bourke, the Mature Cow owned by David and Kenneth Boyd, the Production Class winner also owned by David and Kenneth Boyd and second placing Eugene and Sean Murphy’s Baileys Champion Cow. 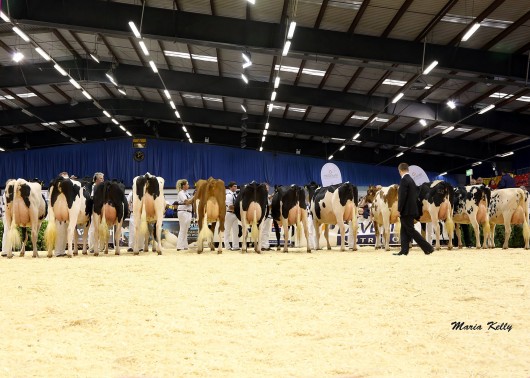 The judge commented on the dairyness, the great udders on all the cows and the quality right down the classes with great front end strength.
Before tapping out his Supreme Champion and Reserve he commented “This is the best show I have ever Judged”
To tremendous applause he tapped out the first and second placings of the Mature cow class, owned by Glaslough Holsteins for Supreme champion and Reserve. Honourable mention went to Cyril Dowling & Tadhg Bourke.
The Judge commented on the tremendous balance, silkiness, openess and great font ends on his Champion and Reserve. The crowd were very pleased with the final selection and comments of “Excellent Judging” was echoed by all.
These two homebred cows also took the Exhibitor award. David & Kenneth Boyd have achieved tremendous success with both these cows throughout the year at various shows throughout the country. Now in her 4th lactation, Glaslough Miss Petra now adds National Dairy Show Champion title to many other show successes in 2014 including; Irish National Holstein Show Champion, Emerald Expo Reserve Champion,Reserve Champion Tullamore and Reserve Champion Baileys Cow competition. Bred from the “Petrelle cow” family, Miss Petra is a daughter of Glaslough Lyster Petal EX 93. Glaslough Goldwyn Bret is a much-admired production cow, currently in her 6th lactation. She has produced over 4,250 kgs of milk solids. In addition to great longevity she has tremendous conformation, classified to Excellent conformation on four occasions. They are both 50 ton cows.
Breeders were commenting that this was a record for the show where Champion and Reserve came from the same stable and where both cows were homebred.
David & Kenneth Boyd also won the Premier Breeder and Premier Exhibitor Award.
They also won the best of the group of three cows.
Glaslough Miss Petra was also crowned Best Udder of the Show award.
Highest EBI Award went to John G. Kirby, Mounteen, Ballinascarthy. 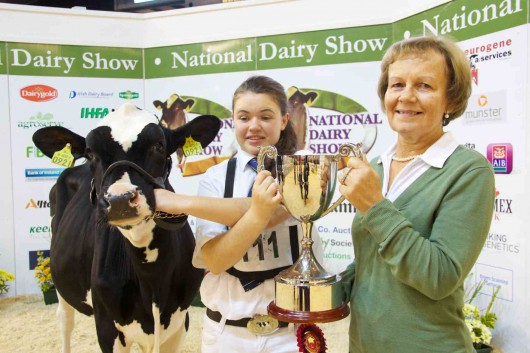 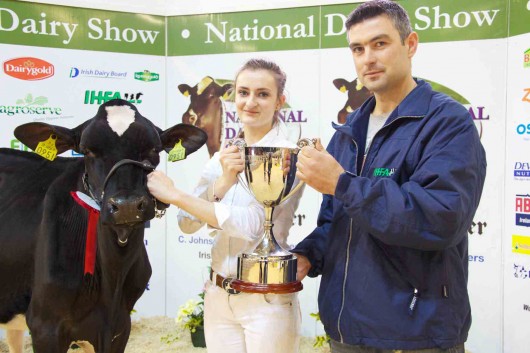 Local shows from Bantry to Tydavnet in Monaghan held rounds of the Showmanship League this year, beginning in May and continuing right through the Summer.
28 Young Members competed in the Final, as part of the 32nd National Dairy Show in Millstreet. Their Stockmanship skills were scrutinised by Judge, Gary Jones from Gorey, Co Wexford, a former YMA member.

Top levels of concentration and reactionary skills were to the fore as each handler competed to present and display their calf to the best of their ability.
Champion Handlers Claire Kirby and Andrea Rafferty were presented with the Showmanship League perpetual trophies, kindly sponsored by the Slaney club and Limerick Clare club.

Each young handler competing was presented with a certificate to commemorate their achievement.
Seamus Crowley, show Director thanked all the breeders, exhibitors, sponsors, trade stand holders, judges, stewards, and all who helped in any way to make the show a success. He also expressed his thanks especially to IHFA and staff who helped with administration.