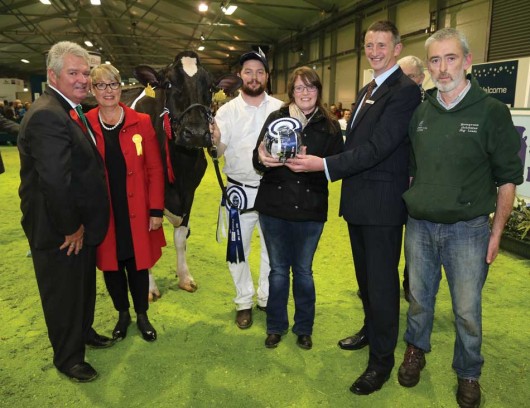 Breeders from the Republic enjoyed unprecedented success at the Royal Winter Fair with a virtual clean sweep of the Holstein Friesian classes. A packed ring-side heaving with a buzzing atmosphere continued right throughout the day. The Royal Ulster Agricultural Society was enjoying a double celebration; its 30th Anniversary show and the first time to host the show in its new location, the Eikon Exhibition Centre, Balmoral Park, Lisburn.

“One hell of a Holstein Championship” is how Jude Selwyn Donald described the Championship line-up in front of him.

“If there was a World Cup competition for Holstein Friesian cows, Ireland would be in the Final” was his sporting analogy, a reference to his native All Blacks success in the recent Rugby World Cup.

Liam and Sandra Murphy’s Evergreen Duplex Ebony was tapped out Supreme Champion and was also crowned Interbreed Supreme Champion rounding off a tremendous year of accolades for their EX95 mature cow; Champion of Tullamore National Livestock Show and Champion of Iverk Show.

“Her presence graces the ring when she walks, exhibiting power and capacity, she shows more depth at the front end and more sweep of rib. Today she is also Best Udder of show”.

Duplex Ebony recently classified maximum score and is backed by seven generations of VG/EX dams from the Canadian-established family that was developed in the Dalevalley herd. The Murphy’s farm near Fenagh, Bagenalstown in County Carlow.

Hallow Holsteins, Gorey, claimed Reserve Holstein and Reserve Interbreed Champion with Hallow Advent Twizzle 3. Sired by Advent, Twizzle 3 has proven to be a great brood cow with tremendous efficiency having already produced 5,000 kgs of milk solids to date. Both cows were exhibited in the same class. The fact that both Champion and Reserve are seven years old is a healthy indictment for longevity in the Holstein Friesian. 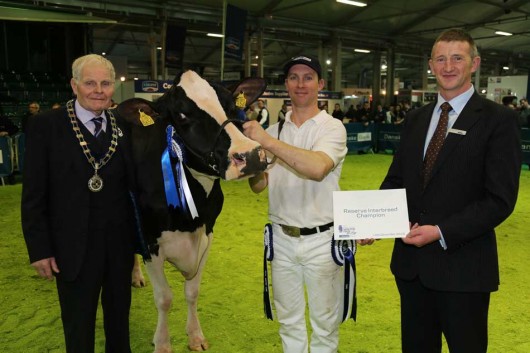 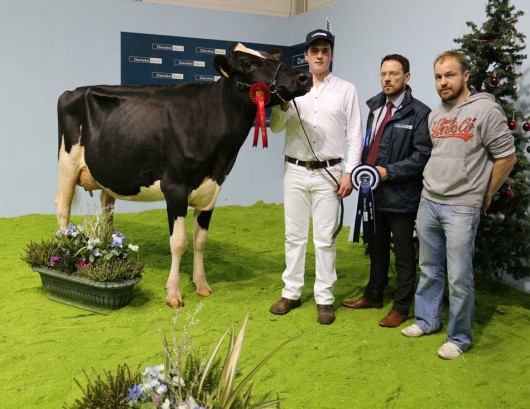 Patrick Colton’s Ardnasalem Fever Sarah was Honourable Mention, a heifer who greatly impressed the judge in her heifer class and going on to take Intermediate Champion. In his comments the Judge said “This young heifer is what the Holstein Friesian is all about, she has so much refinement and strength. She has power, angularity and sweep of rib”.

YMA were to the fore in the Showmanship classes at the start of the day’s Judging.

Selwyn Donald is an accomplished judge from Featherston, New Zealand. He milks 400 Pedigree Registered cows in the Tararua Ranges located on the North Island. He was an Associate Judge at this year’s World Dairy Expo in Madison, USA.

Over 200 dairy cattle were exhibited across the day at the Winter Fair including Jersey, Shorthorn and Ayrshire. Congratulations to Christian Keenan, Monaghan on his success in the Ayrshire classes and also to Brendan Greenan on a successful, busy day on the halter for many class winners.

Many visitors from the South were among the large attendance at what has become one of the largest annual events for the Northern Dairy industry. Since the inception of the Show in the mid 1980’s Danske Bank have been sole sponsor of the RUAS Winter Fair.

The new location at Balmoral Park is very convenient for travel, situated close to the M1/AI motorway junction within short reach of Dublin and the M50 road network.