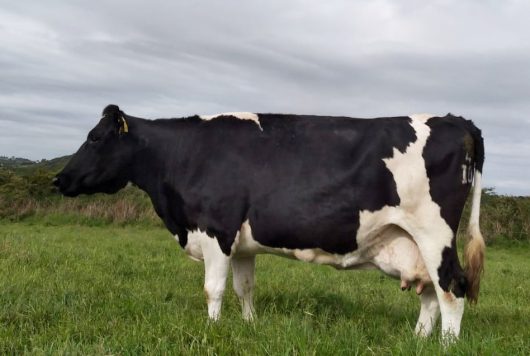 A restful and contented on-farm retirement awaits Laune Bess 522 EX90 3E. This follows a productive milking lifetime yielding in excess of 124,000kgs milk production and 9,400kgs total milk solids in 14 lactations. Born in January 2003 Bess is now aged over seventeen years old. Breeder and owners, Richard and Breda Langford of the Laune herd, who farm near Killorglin in mid-Kerry, are rightfully proud of their prestigious pedigree registered Holstein Friesian home-bred cow and they have honourably and respectfully decided to let her live out her days on the farm at her leisure, basking in well-earned retirement.

She calved-in as a heifer at less than two years of age on January 26th 2005 Bess calved-in for the 14th time on 21st February 2018. An achievement of fourteen completed lactations within fourteen years. Her lifetime calving interval rating is 367 days. In total she was in-milk for 4,102 days with an average lactation length of 293 days. Her consistent ability to regularly go back in-calf promptly each year is such that she only surpassed 305 days in-milk in four lactations, with lactation length extending to a max of 309 days in her 4th & 12th lactations.

She first attained Excellent on conformation in her 11th lactation scoring EX94 for feet & legs, EX91 for rump and VG88 for mammary on IHFA classification.

With a milking platform of 73 acres and a further similar sized out block for youngstock and silage, the Laune herd is all spring calving. 107 pedigree registered cows were milked last year with Richard describing the land type as limestone type soil. 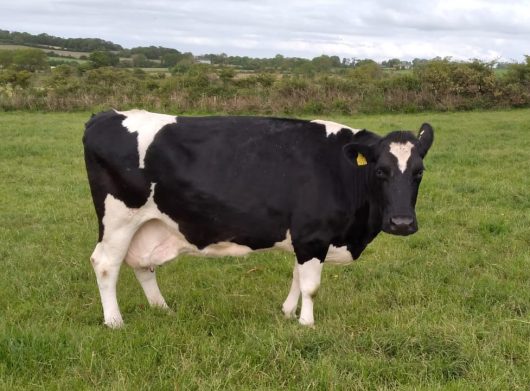 “A five-month winter is the norm here most years. The Holstein Friesian is the breed of choice for me to suit my farming system. Over time the breed has proven itself to be very efficient converters in terms of milk solids production, is adaptable to varying conditions and generates a healthy overall return considering milk output, sale of replacement stock and cull cow and calf revenue”.

IHFA Classification captures Longevity
Cows in 4th lactation or older make up 43% of the Laune herd. There are 24 cows of 6th lactation or greater. In total there are 29 cows scored to VG/EX standard of conformation on IHFA classification. 13 of the 14 cows in their 8th lactation and higher are scored VG/EX.

Bess Cow Family
The Laune herd was graded up to pedigree status in the past and Laune Bess 522 is a home-bred family. Her dam, Laune Bess 144B, born in 2003, recorded a 3rd lactation yield of 7,988kgs milk, 596kgs milk solids, 3.90% fat, 3.57% protein. Her grand dam Laune Bess (ASR) was born in 1995 and she had a high Friesian percent influence with her sire Glensillagh Bellboy, bred by Des O’Connor, Tarbert. Bellboy was a Pennsprings Mr C son from a Moneymore Victor (100% FR) dam scored VG, with the line tracing back to a cow family from the Bracklyn herd of Capt. McCarthy.

Laune Bess 144B had only one Holstein Friesian daughter (sired by MFX – Mars Ferro) thus Laune Bess 522 EX3E is truly a matriarch of tremendous fecundity such that her powerful influential legacy now extends to 8 generations with a total of 38 family members in the herd, all achieved through natural breeding. Her quality breeding of production and conformation is consistently transmitted through the generations with there now being 10 VG/EX descendants in the herd. 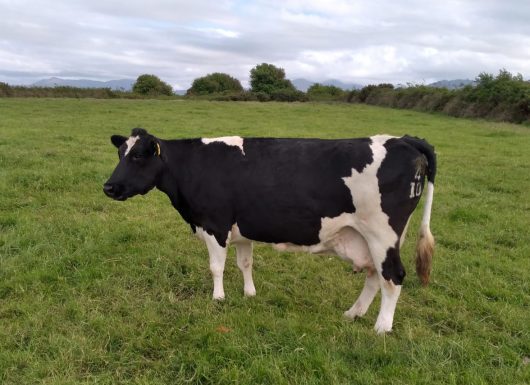 Laune Bess 2000
• Born in ’17 she is the youngest and last Holstein Friesian daughter of Bess 522 and Richard is very happy with her quality and performance so far.
• 1st lactation yield last year of 7,292kgs milk, 570kgs milk solids, 4.36% fat, 3.46% protein.
• Calved in on her 2nd lactation in February this year, gaining time such that her calving interval rating is a very favourable 315 days.